You are at:Home»Lifestyle»Gabby Robinson, Graduate Of the Week

Gabrielle “Gabby” Robinson is a native of Dallas, Texas who was born in February of 2002. Gabby had a very active childhood and even started playing sports at a very young age. By the time Gabby was in the third grade, she was playing volleyball and basketball; and by high school her success on the basketball court landed her a position on her varsity 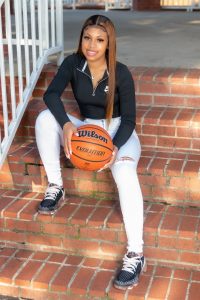 basketball team as a point guard. Throughout her high school career Gabby was a student at Naaman Forest High School in Garland, Texas. Gabby became the captain of the varsity basketball team her junior year and held that title until she graduated. She was also first team all-district her junior and senior year. In a game during the Thanksgiving break of 2019 where Naaman Forest High School competed against Mesquite High School Gabby had what some would call a hot hand that night. She easily hit 6 three pointers combined with a number of inside shots and layups. This helped her end the night with a total of 25 points, 5 rebounds, 3 assists, and 2 steals. Gabby can feel when she’s going to have a good game, and when she has a hot hand her teammates always knew just where and how to get her the ball. Even though Gabby had a full plate academically and extracurricular wise she still found the time to participate in community service for her school and town. Gabby worked at a food pantry and she even assisted her high school basketball coach with his little league team. She found giving back and assisting her community is something she truly enjoys. Gabby is a proud graduate of Naaman Forest High School Class of 2020.

Not only was Gabby a star on her high school basketball team and a volunteer for her community; Gabby also was Academic All-District for maintaining over a 3.5 GPA throughout her senior year. This led her to become a member of the National Honor Society and graduate with a 3.7 overall GPA. Her academic success allowed her to graduate number 53 out of a total of 528 students in her class. Gabby said it wasn’t hard for her to stay focused on her schoolwork because she enjoys having and maintaining good grades. Gabby also enjoyed receiving academic an athletic honors, being competitive on and off the court, and achieving a high rank in her graduating class. Between her parents and her coaches Gabby always had someone making sure she kept her grades up. Another motivation for keeping her grades up was the fact that she knew some of her fellow peers and even some schools were watching her. In the fall, she plans to attend Prairie View A&M University in Prairie View, Texas. She will be majoring in nursing because she wants to become a neonatal nurse. It would be even better if Gabby could become a traveling neonatal nurse. That would allow her to see different parts of the world and do a job that she loves. Gabby loves helping people and she loves working with kids this led her to decide on this career path because it will combine the two things she loves. When she was younger she wanted to be a pediatrician, but she soon realized that pediatricians didn’t do what she thought they did. So becoming a neonatal nurse would be a lot better for her. In the next ten years, Gabby sees herself achieving her goal of becoming a traveling neonatal nurse. One quote Gabby wants to leave readers with is, “Stay motivated, and stay around people who love you. There is always a light at the end of the tunnel, and something good always comes out of a bad situation as long as you stay motivated. Nothing good ever comes out of giving up.” We are proud of you Gabby and keep up the good work.