You are at:Home»Sports»PVAMU VS GSU at State Fair Classic

The State Fair Classic is known as one of the most popular rivalries between two well-known Historically Black Colleges and Universities (HBCU’s); one HBCU from Texas and one HBCU from Louisiana. Both schools are members in the Southwestern Athletic Conference and are eager to take a win back to their home state. The schools took turns housing the event at their home stadiums.  However, this event became so popular among fans and alumni that it created a need for a bigger stadium to house the growing crowds. Prairie View A&M University from Texas and Grambling State University from Louisiana then began meeting in Dallas to play at the State Fair Classic and have done so now for the past 35 years. However, this football event is not the only competition being held at the State Fair Classic. During the halftime show, the Prairie View Marching Storm and the Grambling State Tiger Marching band meet on the field to have a “battle of the bands” and demonstrate why their band is superior to their rival. Every year, fans gather with hopes that their football team and their marching band will blow away the opposing competition. This year at the 2019 State Fair Classic the Prairie View A&M Panthers defeated the Grambling State Tigers 42-36. 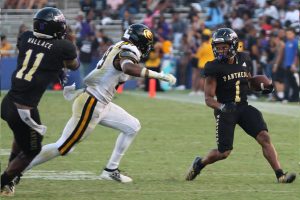