You are at:Home»Lifestyle»Who Is She?

Renee Lawless currently stars as Katheryn Cryer on Tyler Perry’s “The Have and Have Nots. The series airs on Oprah Winfrey’s OWN network and follows three families and their lifestyles as they intersect with one another in Savannah, Georgia. The rich and powerful Cryer and Harrington families dubbed the “Haves” and the poor and destitute Young family dubbed the “Have Nots”.

Renee was born in Knoxville, Tennessee and later moved to Jacksonville, Florida. She is a graduate of Stetson University and later received her Master’s Degree from the University of Cincinnati in Vocal Performance.

As a seasoned theater actress, Renee recently performed with the Broadway national tour of “Wicked” as the Midwife and understudy for Madame Morrible, the headmistress of Shiz. Renee also appeared on Broadway in Disney’s “Beauty and the Beast” as Eggtimer, Ms. Potts and Madame de la Grande Bousch.

In television and film, Renee has been featured in “Heavens to Betsy” along with Dolly Parton “The Obituary” and “Th 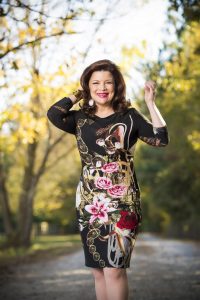 Renee is now in pre-production of her own video blog series “Renee’s Way or the Highway”. We will be able to turn in later this year.

AMPS:  As a little girl growing up in Knoxville, TN, what did you dream for your future?

Renee:  I was born in Tennessee but actually moved to Jacksonville, Florida at the age of 9. My TV programming was very limited because there were only 3 channels available for viewing and those channels were the three major networks. I never thought of little girls growing up to be “movie stars”. My dream as a young a girl was to become a pediatrician.

AMPS:  Who or what was your biggest inspiration in choosing to become an actress?

Renee:  Although I was in every stage production since kindergarten, there were two people that impacted my life and made me believe that I could become an actress – Martha Sue Gregory, my high school choral teacher and Carman Adkins, my high school drama teacher.

AMPS:  Early in your career you were best known for your work in stage plays. You toured for several years in national touring productions of “Wicked” and “Beauty and the Beast”. How did you evolve into TV and film?

Renee:  My training was primarily in stage and voice but my ultimate goal was always TV and film. I chose the path of theatre knowing that this outlet would present networking opportunities. I worked on a project with Dolly Parton for a TV pilot. Even though the show did not air, I was certain I wanted to pursue TV and film. When “The Have and Have Nots” was presented to me, I jumped at the opportunity.

AMPS:  How did you prepare for success and your journey along the way?

AMPS:  When did you know that you had achieved success or is it elusive?

Renee:  What is success?  I think success is relative and defined individually. I have had many successes as well as failures along the way. In this profession, notoriety is considered successful by some. I still have many personal goals to achieve.

AMPS:  How were you cast for the role of Katheryn Cryer, the family matriarch, in the TV series “The Have and Have Nots”?

Renee:  I was in Las Vegas on tour with the stage production of “Wicked”. It was the end of September, 2012 and I was preparing to give my notice to leave the show. I was lying in bed reviewing an acting database which shows upcoming auditions. I was in search for my next role. I saw the character breakdown of “Katheryn Cryer” of “The Have and Have Nots”. I remember sitting up in bed and saying a loud “That’s me. I know this woman. I am this woman”. I didn’t mean it literally. But from an acting perspective, I “got her”.

I clicked on the link and saw it was a Tyler Perry Production. I immediately thought there was no way that I would have a chance for this role. I almost deleted this opportunity but was compelled to “go for it”. Without consulting with my managers, I self- submitted my resume.

Within two weeks, I was asked to submit an audition tape. Two months later, I was flown to LA for a call back audition.

Shortly after that, I was offered the role.  Two weeks later, I was at the studio ready to shoot.

No Risk; No Gain!!!  Never underestimate God or His plan for your Life.

AMPS:  The current season of “The haves and Have Nots” shows vulnerability in Katheryn Cryer that we haven’t seen in the past. Katheryn pleads with Hanna for strength and support. How difficult is it to expose these emotions?

Renee:  First of all, there is nothing too difficult when you are working a scene with Crystal Fox. She is an amazing and giving actress. She allows me to be Katheryn and divulge those vulnerabilities.

AMPS:  Your success as Katheryn Cryer is much acknowledged and celebrated today. Rejection is not always a “No”. Sometimes it just means “Not Now”. How did you reconcile rejection during your career and not take it personally?

Renee:  Time, time, time. I would be lying if I said there were not times in my career that I didn’t take it personally but timing has taught me that rejection is a part of the journey. In the words of Scarlett O’Hara “Tomorrow is another day”.

AMPS:  During the tough times, how did you remain resilient, focused and still have faith that it will happen for you?

Renee:  I have always felt this is what God called me to do. He has always provided for me.

AMPS:  What is your most significant life lesson?

Renee:  After being a victim of a horrible bullying incident my senior year of high school, I was determined to never let anyone steal my joy. That lesson has sustained me thru my life.

AMPS:  How do you relax during your down time?

AMPS:  Will you share a little about your video blog series “Renee’s Way or the Highway”?

Renee:  Renee’s Way or the Highway” is the Vlog platform which allows me to express my varied interest in all things Christmas related, crafting and travel. I also convey my unique views on various other topics.

AMPS:  When and where can we follow your series?

Renee:  The Vlog will be available for my fans during the 4th quarter of 2016.

AMPS:  You have a Master’s Degree from the University of Cincinnati in vocal performance. Can we expect any musical recording from you in the future?

Renee:  Yes, I am developing a CD of my favorite Christmas songs. I am hoping to release it for the Christmas 2017 season.

AMPS:  What other upcoming projects can we look forward to?

Renee:  In addition to the Vlog and CD, I have a number of speaking engagements coming up. I am also partnering with a number of entrepreneurs on some unique projects that you will hear more about soon.

Renee:  Above all…Commitment! It is not an easy road to travel. If your commitment is to money and fame, get out. You are setting yourself up to fail. You have to love what you are doing and can’t imagine doing anything else. Continue to study and learn. No doesn’t always mean no, just not now. There is a lot of rejection. You must be able to absorb it with grace and learn to move on. Mental toughness is a necessary trait to have.