You are at:Home»Entertainment»Fatimah Taliah From Dancing to Acting

Fatimah Taliah is a film and television actress whose journey began as a dancer and model in Chicago, Ill.

Fatimah performed as a background dancer for Syleena Johnson after completing high school in 2001. While pursuing a degree in dance and theater at Columbia College in Columbia, Missouri, a twist of fate turned her focus to modeling. She landed a modeling contract with Elite Model Management in 2004.  It was there that her agents discovered her out going and charismatic personality.  Their recognition led to Fatimah taking sketch comedy classes at Second City, the first ever on-going improvisational theater troupe in Chicago, Illinois. She continued her studies at The Green Room, an on-camera training program, also located in Chicago, Illinois

Fatimah is best known for “According to Him and Her”. This is a TV series that airs on Centric and approaches topics of relationships, friendships, dating and sex in a “He said, She Said” battle of the genders while giving viewers the opportunity to see how the other sex thinks.

AMPS: You began your entertainment career in dance and theater, how did you transition to modeling?

Fatimah: I feel dance was a useful tool in my transition. Dance allowed me to express myself artistically. It taught me body angles and poses, facial expressions and non –expression.  And just as important, it taught me poise. When you really dissect the characteristics of modeling, you will find these traits. These attributes were valuable in my transition.

AMPS:  When you were a little girl, what did you want to be?

Fatimah: I wanted to be exactly who I am now. As a child, I saw Rudy Huxtable and her family but it looked different from my family dynamics. My parents had nine to five jobs. I wanted to entertain but I didn’t know that it could be my reality. When I looked around me, I did not see my dream in my neighborhood. Even though I couldn’t see beyond the little girl in the mirror, I never gave up my dream.

AMPS: Who or what inspired you and why?

Fatimah: I am inspired by many different things. The dance culture, the fashion world and comedy are definite stimuli for me. 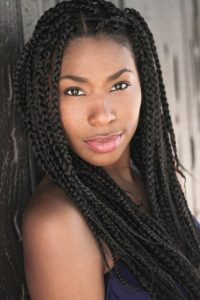 AMPS: How and when did you decide to pursue comedy?

Fatimah: My modeling agent, Eva Jerusalem, tried on many occasions to censor my personality. She, as well as my other agents, felt that I was too amplified on modeling projects. They wanted me to soften  my approach, talk less and look pretty.

After moving to Los Angeles, I was able to express myself with humor. Comedy was always there, just lurking below the surface.

AMPS: Who or what has been an inspiration for your comedy and/or modeling career?

Fatimah: I am a huge fan of Whoopi Goldberg. I think her 1996 one woman show was incredible.

As a model, I favor girls who are quirky and somewhat awkward. I feel their differences are unique and mysterious which is enticing and interesting.

AMPS: What prompted your move to Los Angeles?

Fatimah:  Opportunity was my driving force for the move. Modeling projects had slowed down and I did not want a career of catalog modeling. I talked with my agent and my support system about my future in the entertainment industry. Together we decided a move would be in my best interest. The decision to move is one of stepping out on faith, believing in yourself and never giving up on your dream.

Within six months of moving to Los Angeles, I was writing for the Bethenny Frankel show. This was my first big break in LA and it led me to stand- up comedy.

Within a year, I was performing at the Comedy Store in LA. During the last two years, I have continued to perform at the Comedy Store, The Ice House in Pasadena, CA and Flappers in Burbank, CA. I would estimate that I have performed at approximately 90% of the comedy clubs in LA and the surrounding areas.

AMPS: You were a comedy sketch writer for the 2015 CBS Diversity Showcase. How was that experience?

Fatimah: That was a defining moment for me. Initially, I auditioned for the part of a sketch actor but did not get the role. I was so determined to be a part of this showcase that I was prepared to accept an internship. I did my research to see what else was available.  I eventually sent an email to the department head expressing my interest in sketch comedy writing for the showcase.

Rick Najera, director of the CBS comedy showcase, contacted me about joining the CBS training program. I was all in because I knew that most “Saturday Night Live” actors trained through this program and could be featured during the comedy showcase.

AMPS: You are currently writing you own TV series titled “The Life and Times of Samantha Jane. Can you give us a little insight into the character of Samantha Jane and how you developed this character?

Fatimah: The character of Samantha Jane is new to Los Angeles and is trying to figure out life and love in a brand new city. This series was inspired by my fascination with the situation comedy and drama series   of the 90’s. I spent a lot of time with my grandmother and I would watch hours and hours of these shows. I was a huge fan of “The Wonder Years” and how the voice over narrator would tell the story of Kevin Arnold. I always kept that format and time frame in mind.

AMPS: What other projects can we expect from you in the future?

Fatimah: I’m still developing the character of Samantha Jane. The current episodes end with a big question mark for Samantha Jane. Fans are left wondering what’s next.  I will tell you that the next episodes will be an adventure. Each day will present a new challenge but Samantha Jane will get through it.

Amps: How do you reconcile your success in such a short period of time?

Fatimah: I feel that success if relative to each individual. But I do note my growth in the entertainment industry has served as confirmation of my ability. I do know that if you have faith in yourself and are willing to work hard, dreams will come true. All things are possible.

AMPS: What advice would you like to share with young ladies wanting to pursue a career in the entertainment industry, especially women of color?

Fatimah: First of all, no one is going to give you anything for free. It is not always a glamorous life. It takes hard work, a thick skin and persistence to carve your path into your genre of entertainment and to remain relevant once you get there. Training is also a vital tool. You must prepare yourself for the competition and develop traits that will separate you from the masses.