AMPS: The Amps family has followed your career since our last interview but I want you to share with everyone the latest on Rodney Perry. Can you tell you about Bounce TV and your role with this network? 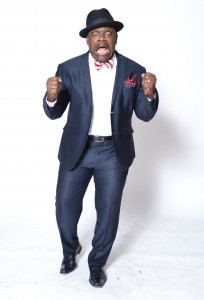 Rodney: “Bounce TV” is a new African American digital multicast television network founded and launched in 2011. The programming targets the African American community. “Off the Chain” is a comedy special and one of the featured shows on Bounce TV. I performed on the show the 1st season. The Execs like my brand of comedy and invited me to come back to discuss my interest and ideas to host the comedy show. I already had established a relationship with BET and TV1, but it was amazing to cultivate a new relationship with a new network from the ground floor. This was truly a blessing.

AMPS: How are the comics chosen for “Off the Chain”?

Rodney: We did something a little different this year. We produced the “Off the Chain” tour and traveled to cities around the South East to hold live auditions. We also accepted tapes of comedy routines. The comics were chosen from the live auditions and the tapes that were submitted.

AMPS: How did you get the role of Harold in Tyler Perry’s “Madea’s Big Happy Family”?

Rodney: Roger Bob, who was Tyler Perry’s right hand man at the time, came to a club in Atlanta where I was performing. After the show, he said he would give me a call tomorrow. He did call and asked me to come to the studio to audition for the role of Harold. I went to the audition on Thursday but did not hear back from the studio until Saturday afternoon. I had just told a friend about the audition early on Saturday. I didn’t think that I had gotten the role because shooting was scheduled to begin on Monday. Just as I finished telling my friend about my audition, the phone rang. It was the studio congratulating me on getting the role of Harold.

AMPS: How did it feel to get that call?

Rodney: I felt really good about my audition but I was shocked to actually get the call. It felt great.

AMPS: How does your family handle your busy schedule these days?

Rodney: It does get tough sometimes, especially when I’m traveling but if I worked at Walmart, I would have to balance my 40 hour a week schedule. We just have to learn to do it. I just came back from Korea on a military tour and I will be going to Japan this year. I do my part and give back to our military. When I’m home, that is family time.

AMPS: How do you balance your home life and your career?

Rodney: The entertainment business is a very selfish business if you are successful at it. You have to give yourself to it. Sometimes the family will fall by the wayside if you allow it to happen. My family has been my saving grace. They understand and accept what comes along with this line of business. When I’m home, it’s like any other home-the kids are yelling, my wife and I are cracking jokes and we deal with whatever needs our attention. My family is what keeps me going and keeps me grounded.

AMPS: Do you expect to do anything else with Tyler Perry in the future?

Rodney: I ran into Tyler Perry after “Madea’s Big Happy Family” and thanked him for that role. Hopefully he will keep me in mind for something in the future. I have developed great relationships with other directors like John Singleton and Dave Talbot, so look for Rodney Perry on the big screen.

AMPS: What can we expect from Rodney Perry in 2015?

Rodney: I believe that 2015 is going to be a breakout year for me. I have my comedy special. It will also have a digital release. I have a video that will air on Bounce TV and it will go on DVD this year. I will continue to travel doing my standup comedy and continue to build on the foundation that I already have in place.

AMPS: What advice would you give someone who is beginning this journey?

Rodney: I would say “Stay Focused”. There are a lot of very talented people that share your dreams. Most of them have multiple talents to offer. Don’t try to do too much in the beginning. Keep the focus on one area and refine that skill. It will make a way for your other talents.